The Federal Reserve is finally beginning to admit that it’s here and, at the moment, it’s spectacular. Chairman Jay Powell is still sticking with his “it’s only transitory” story, at least for now. Mr. and Ms. Market were spooked for a moment, until they remembered that money printing flows directly into the stock market.

So, we dividend investors continue our hunt for safe, meaningful yields amidst this mania-of-sorts that has enveloped everything from tech to lumber to crypto to big tech again. We’ll discuss five safe utility dividends—paying up to 9.9%!—in a moment.

First, let’s review the agency’s acclaimed “dot plot” which showed not only that the central bank was now expecting rate hikes by 2023, but that we’d get a pair of them. 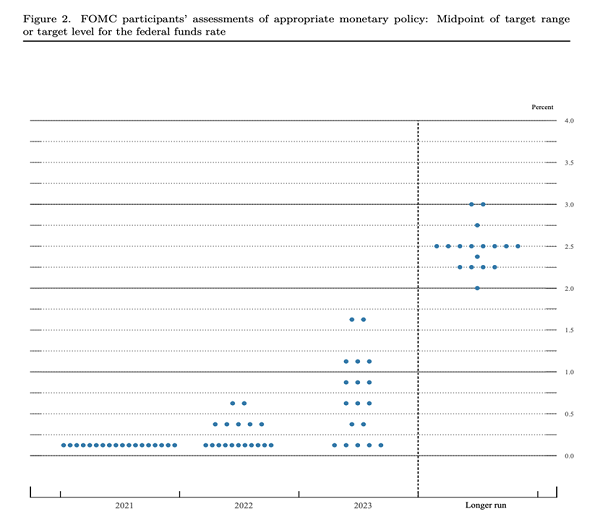 Moreover, subtle language changes in its statement hint that the Federal Reserve is trying to get everyone used to the idea that it’ll eventually taper its massive asset purchases.

Traditionally speaking, utilities aren’t a classical counter for inflation. But high-yield utility stocks should be insulated from this effect. After all, a 2% paying Treasury note is no competition for a 6.6%, 5.9%, or—better yet—9.9% dividend.

Spark Energy (SPKE) is a rare small cap. But it has built up a user base of 700,000 Americans across 100 electric and/or natural gas utility service territories in 19 states, from California to Florida to Maine.

If that seems like a wide geographical footprint for a utility company, you’re right. And that’s because Spark Energy is a retail provider that purchases energy from independent power generators and sells it to consumers, sending it through the very same grid used by traditional utility companies.

The good news? SPKE’s business is able to fund a sizable dividend that, at 6.6%, is better than almost every last utility yield out there.

The bad news? Dividend growth has been nonexistent for years. Spark’s operations aren’t nearly as stable as a traditional utility company—revenues over the past five years have fluctuated between $554.9 million and $1.0 billion. They  have been headed in the wrong direction of late, however. Plus the stock’s performance has been a rollercoaster.

You Must Be This Tall to Hold SPKE 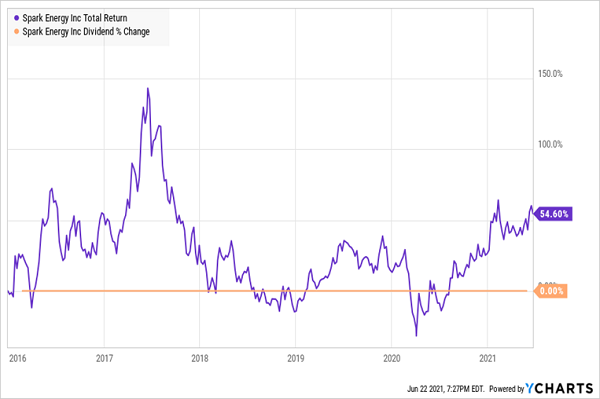 PPL Corp. (PPL) is a sprawling electric-and-gas utility with some 7,500 megawatts of regulated generation capacity. It’s one of the largest utilities of its kind, serving more than 2.5 million customers in Kentucky and Pennsylvania. It also will serve Rhode Island eventually thanks to its recent acquisition of Narragansett Electric from the U.K.’s National Grid (NGG), which bought PPL’s U.K.-based assets to make PPL a purely domestic player.

Naturally, utility stocks can also grow if its customers use more power, and that’s a trend you’re going to see across the states as the economy recovers and more businesses head back to the office and open up shop. PPL also expects to improve its rate base by 4% annually over the next three years.

But we’re not asking for much growth out of PPL. Our goal with utilities is to buy at a fair price and a decent yield, and try to get enough dividend growth to beat inflation.

Dividend growth is sluggish, though. 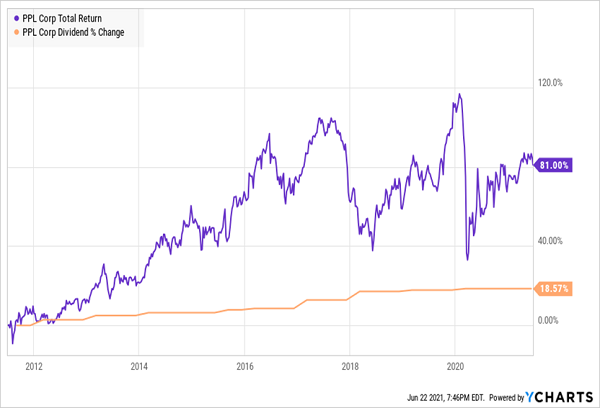 PPL’s payout has inched ahead by about 1.7% annually on average over the past decade. And in fact, the April payout—typically when PPL ups the ante—remained level this year.

This payout is still large enough that it should weather any smaller-scale interest-rate fears with ease. But price upside is limited because there is no “payout magnet” pulling the stock higher.

For meaningful yield from utilities, the only answer is CEFs. Closed-end funds (CEFs), as a reminder, have a few tricks up their sleeves that allow adept managers to run circles around ETFs. Chief among them: They can use debt leverage to amplify their bets.

That’s at least part of the reason why Duff & Phelps Utility and Infrastructure Fund (DPG) can offer nearly 10% in annual yield. At a high effective leverage of 28%, DPG’s management can effectively invest 28 cents on the dollar more into their portfolio holdings.

But Duff & Phelps pulls other levers, too. For instance, this is a global fund, not domestic—the CEF currently invests 35% of assets outside the U.S. Especially in the case of European companies, that typically translates into higher yields. Also, DPG invests in infrastructure companies that own things such as toll roads, bridges and airports, and its definition of “utilities” has been loosened to include midstream energy… specifically, master limited partnerships (MLPs).

MLPs are the energy world’s toll takers, collecting money based on the assets that pass through their pipelines and storage facilities, and they’re required to pass along a sizable chunk of their profits to their “partners” (shareholders) in the form of dividends. And DPG’s midstream holdings, such as Enterprise Products Partners, L.P. (EPD, 7.5% yield), provide far more income than most utilities do.

That’s great from an income standpoint, but tough on performance. You’re effectively diluting the stable nature of utilities with energy firms that can turn on a dime if oil and natural gas get hit. That has really weighed on DPG’s long-term performance, even against basic index funds like the Utilities Select Sector SPDR Fund (XLU).

Energy Has Been a Long-Term Weight on DPG 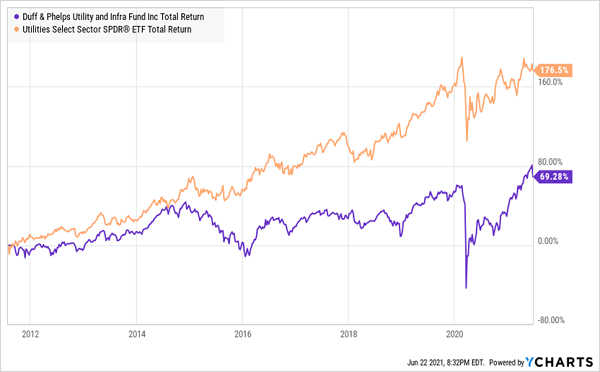 Don’t get me wrong: I think there’s opportunity in the energy patch right now—in fact, one of my latest recommendations comes from the midstream space. But mixing MLPs and utilities is like mixing oil and water.

Reaves Utility Income (UTG) is a much purer play on the utility sector. Its 40-plus holdings are largely traditional utility plays such as NextEra Energy (NEE), American Water Works (AWK) and EverSource Energy (ES).

It does have one twist, but it’s more understandable and acceptable. That is, UTG also invests in telecommunications stocks such as AT&T (T) and Verizon (VZ).

These plays make sense on multiple levels. Internet and phone service are virtually necessities in the 21st century—maybe not quite on par with water and power, but awfully close. There’s also little growth left in telecommunications in saturated developed markets like the U.S. And telecoms largely behave like utilities, providing incremental growth but typically respectable dividends.

Reaves also uses leverage, but only 16%, or about half as much as DPG. That lends itself to a “smaller” yield of 6.3%, but also steady, decent performance about on par with the XLU over time. It also boasts modest dividend growth over time, which will help in the fight against inflation.

One slight advantage over XLU? UTG pays its dividends monthly. 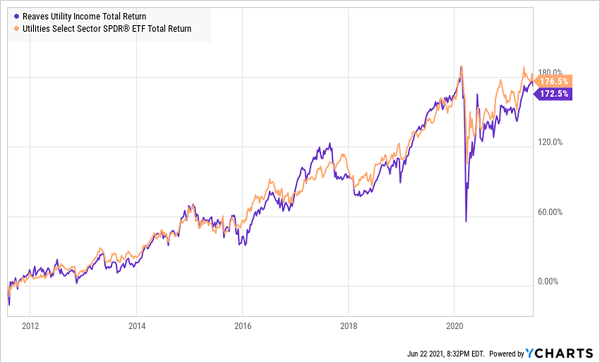 I don’t like that UTG trades at a premium to its net assets, however slight (2%). Utilities aren’t a great source of price performance to begin with, but we’re just shooting ourselves in the foot by overpaying.

Gabelli Utility Trust (GUT) is another monthly dividend payer that invests in traditional utilities and a few telecoms: NextEra, Duke Energy (DUK), Verizon, Xcel Energy (XEL) and the like.

And at first blush, GUT would seem to be the leader of this pack.

Gabelli Leaves the Pack in the Dust 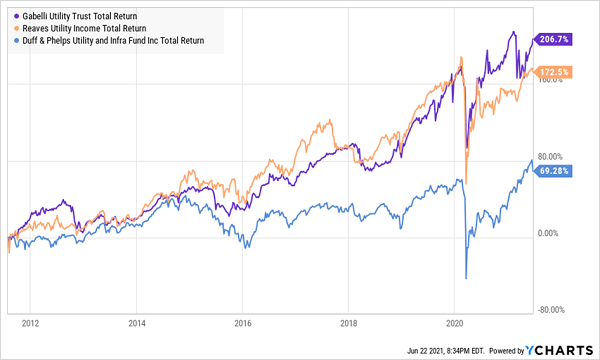 Performance is tops, for one. It also uses more leverage, which helps it deliver a much more satisfying yield of nearly 8%.

But one single, solitary number brings it all to a screeching halt.

That’s the premium GUT trades to its net asset value at the moment. To put it another way: It’s like if someone said you could buy an ice cream cone for $1, and you said, “How’s about I give you $1.78?” Everyone else viewing the transaction would look at you like a lunatic, and rightly so.

This isn’t an aberration. The fund’s five-year premium to NAV is 44%. In the past year, GUT actually traded at more than double the worth of its assets! In its own press release earlier this year, Gabelli Utility Trust’s own board of trustees fessed up:

“The Board of Trustees believes that the premium at which the Fund shares trade relative to net asset value is not likely to be sustainable. Shareholders participating in the Fund’s dividend reinvestment plan should note that at the current market price, the reinvestment of distributions occurs at a premium to net asset value.”

Gabelli is an upstanding firm with an enviable track record. But if you buy anything at that kind of premium, you’re inviting disaster.

And worse? You could’ve been investing your hard-earned dollars in a batch of 7% monthly dividend payers that are currently trading at downright stellar prices.

My “7% Monthly Payer Portfolio” is an elite set of high-income, high-frequency dividend payers that, at current prices, are smack-dab in the middle of our ideal “buy zone.” And as the name suggests, these 7% dividends are paid out to investors each and every month.

Many of the picks in my “7% Monthly Payer Portfolio” leverage the power of steady-Eddie holdings to generate not just massive yields, but shockingly aggressive price performance. That allows us to do the unthinkable from an income strategy: double our money much more quickly than traditional blue-chips-and-mutual-funds portfolios.

They’re not just great, either.

If you drop $500K—less than half what most financial gurus suggest you need to retire—into this powerful portfolio now, you’d kick-start a $35,000 annual income stream. That’s nearly $3,000 a month in regular income checks!

The time to get in is now, while you can still buy these names at bargain prices. Click here to get everything you need—names, tickers, complete dividend histories and more—instantly!