The Best, And Worst, Dividend Stocks for 2016

With the first trading day of the New Year upon us, it’s time to clean up that portfolio. Get rid of those dividend dogs, and replace them with winners that’ll boost payouts and appreciate in price in the year ahead.

First, let’s call out the paper payout tigers. These stocks may look good on paper (thanks to their yields) – but if you own them, you should sell these ticking time bombs. Best case, they’ll see marginal dividend growth in 2016. Worst case, they’ll chop their payouts – their stocks will get punished by 20% or more.

Mortgage REITs should be sold immediately, such as poster child Annaly Capital (NLY). The firm holds fixed rate securities that decline in price when rates rise.

Rates shouldn’t rise much next year, but they’ll probably bump up another 0.5% to 1% or so. That’s how the “smart money” is betting on the Fed Funds futures market at the moment.

As this unfolds, it’s going to hit Annaly’s portfolio. Some investors may argue that the rate hikes are already priced into the stock price, but that wasn’t the case the last time the Fed raised rates.

Annaly Investors (Somehow) Got Blindsided in 2005 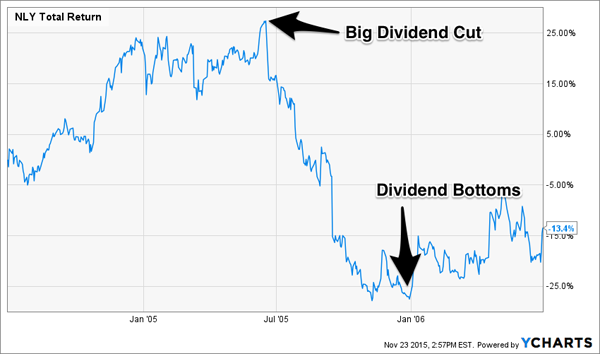 This time around, I wouldn’t wait for the official payout cut – I’d sell now.

Same for aging telecom giant AT&T (T), which has paid out more in dividends per share than its earned per share for three out of the last four years. Every year, management bumps its payout by a penny just to “keep its streak alive.”

That’s great, but the company currently boasts a 193% payout ratio – which means it’s paying out twice as much in dividends as it’s actually making in profits. 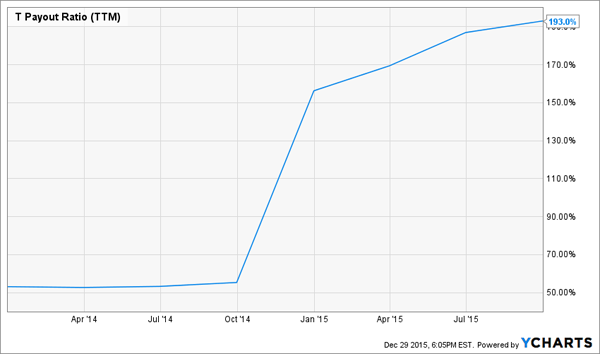 Besides, AT&T is, at best, the second-most innovative telecom. Verizon (VZ) has better growth prospects, and less than half the payout ratio. I’m not in love with Verizon either, but feel a lot better about it than AT&T – which would slash its dividend today if it had responsible management.

While AT&T has an astronomic payout ratio, BP plc (BP) goes one step further with a negative payout ratio. You can only achieve that with negative earnings, and that’s what BP did – it lost $2.49 per share over the last 12 months while stubbornly paying out $2.40 in dividends.

It bridged the gap with $5 billion in additional long-term debt.

BP’s big 7.5% yield should have been reduced yesterday. Oil prices are languishing at 11-year lows, and the goo won’t be rebounding meaningfully in 2016 with U.S. inventories at 30+ year highs:

If you own the dogs, don’t worry – there are a few good trade-in opportunities for them.

Two months ago, I highlighted Oaktree Capital (OAK) as a stock set to soar after the credit markets collapse. While Barron’s recommended taking a flyer on it, I advised caution – this is not the type of stock you want to own prior to a credit collapse.

Remember, fellow “credit crisis darling” Blackstone Group (BX) feasted on distressed issues in 2009. BX rocketed up more than 1,000% in the years ahead, with profits from the financial wreckage to thank. 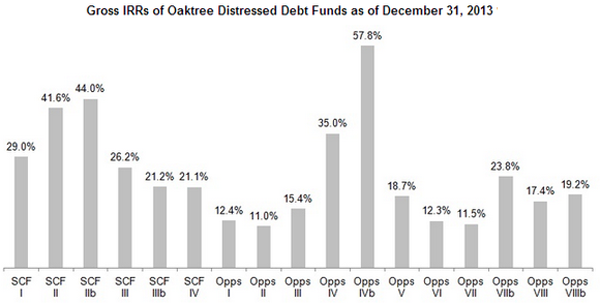 I have no doubt that Marks is aggressively deploying capital today. Keep an eye on his company’s stock, and be ready to buy it when the bond market carnage begins to subside.

Payroll processor Paychex (PAYX) has jumped 19% since I recommended it on October 24. The firm is riding an outsourcing trend that’s not going away. Demand for payroll outsourcing – 60% of Paychex’s revenue – continues to grow steadily. And the other 40% of revenue, HR outsourcing, is projected to grow by 12%+ annually until 2018.

It’s a beautifully capital-efficient business that can shovel most of its profits directly to shareholders. Gross margins are a gaudy 72%.

The company pays a 3% dividend, and increases it aggressively and regularly. It boosted its payout by more than 10% in 2015 – expect a similarly healthy bump in 2016.

I’ve got a few more darlings to share with you – but first, let’s get back to the financial wizard I mentioned earlier.

Howard Marks really is the richest and smartest money manager that most individual investors have never heard of. His investment commentary in his Oaktree Memos is read religiously by many of the greatest investors in the world – including Joel Greenblatt, Jeremy Grantham, and Warren Buffett.

According to Marks, the key to successful investing is “second-level thinking.” This means looking beyond the obvious – as we did in our analysis of dividend payers above – to see the story behind the story.

For example, first-level income investors see a stock paying 5% or more, and they buy it.

Second-level investors, on the other hand, will assess risk based on absolute probabilities rather than perception. They’ll say: That yield is 5%, but it’s not sustainable based on what I’m reading in the P&L. I’ll sell – and buy a safer issue.

This technique has not only helped me steer clear of trouble – it actually helped me identify a trio of healthcare stocks that’s paying an average yield of 7.2%. They’re flying under the radar of the first-level types, who spent much of 2015 fretting about China and Janet Yellen.

Not only are these 7% yields safe, but they’re growing every year – and in one firm’s case, every quarter. Click here and I’ll give you the names and tickers of each company, along with the second-level research that I used to uncover them.