The Post-Brexit Retirement Portfolio: 4 Buys for 100% Gains and 6.0% Yields

All weekend long I’ve heard from investors terrified of Brexit’s impact on their nest eggs. For the most part, they are in or near retirement—and now more than ever they are looking to shift more of their portfolio into fixed-income securities.

The problem? These are grim times for fixed-income investors. A one-year CD yields around 1.25%, and 10-year Treasuries aren’t much better, at 1.6%. That’s flirting with an all-time low—and leaves you with a loss after inflation.

But don’t worry. There are still good places to hunt for yield in the fixed-income space. In a moment, I’ll give you two options that together pay out a tidy 6.0%, so a $250,000 investment in each one would bring in a nice $30,000 income stream.

That makes them well suited to most retirees’ core need: income now. But you shouldn’t give up on growth, either, because if you’re 65 today, you’ve got a great chance of living till 85, and that’s plenty of time to double your money by investing in top-quality dividend-growth stocks.

That’s why, a little further on, I’ll show you two stocks that help you “go on offense” and leave a real legacy for your kids and grandkids. Both are poised to double their payouts—or more—in the next decade.

And as I’ve showed you before, studies have shown that dividend growers outperform all other stocks (including steady payers and non-dividend-paying stocks) on a total return basis, so you can expect 100% gains out of these two picks, too.

Let’s get right to it, starting with…

A 5.7% Yielder That Pays Dividends Monthly

PFF trades roughly equal to its net asset value, so it’s not the place to go for big gains. But that’s okay, because we’re mainly interested in its yield, which is impressive, at 5.7%—nearly three times the S&P 500 average—plus the fund pays dividends monthly. That’s convenient for retirees, because those payouts line up nicely with your regular bills.

And what you give up in gain potential, you make up for in stability: PFF sports a beta rating of 0.34, meaning it’s 66% less volatile than the S&P 500. Here’s how it held up in the past year’s market brushfire: 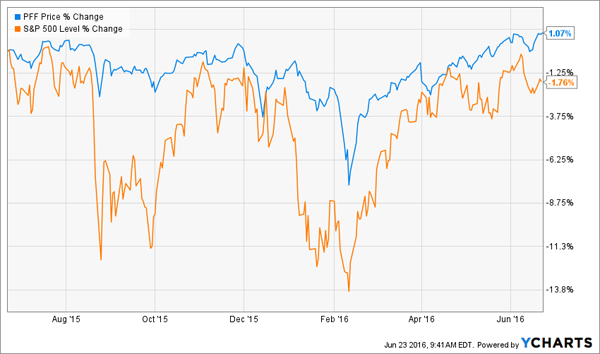 Expenses are a reasonable 0.47% of assets.

Many first-level investors worry that bonds and preferred shares will take a hit when interest rates rise, but those fears are overblown, because at the speed the Fed’s going—with just a single quarter-point rate hike on tap this year, if that—it will be a long time before yields upwards of 5.7% yield lose their appeal. Most likely, they never will.

The SPDR Barclays High-Yield Bond ETF (JNK) holds 807 high-yield corporate bonds, many of which are below investment grade.

That raises the risk of defaults, but the fund’s 6.3% yield helps offset that. Moreover, the average term to maturity on its bonds is in the sweet spot, at 6.6 years. That gives you a healthier yield than shorter-term bonds without the heightened sensitivity to interest rates you’ll face with longer-term bonds.

Now that we’ve covered the income side, let’s move on to our two growth plays.

GD: Because the Generals Always Get Their Way

Defense is one sector that will win no matter who comes out on top in the presidential election, because Hillary Clinton and Donald Trump are both more hawkish than Barack Obama.

That’s a plus, but we need to take a longer view than the next few months—or four years, for that matter. A perfect “legacy stock” to hold for, say, the next two decades is General Dynamics (GD), which makes armored vehicles, submarines and IT systems for militaries around the world.

Let’s start with dividend history: last March, GD became a Dividend Aristocrat—or a company that’s hiked its payout for at least 25 straight years—when it announced a 10% hike to its payout.

The stock yields just 2.2% today, roughly the same as the S&P 500 average, but GD shareholders are no strangers to inflation-busting dividend hikes, with the payout rising 230% over the past decade. That’s helped power the stock to a 166% total return in that time, clobbering the SPDR S&P 500 ETF (SPY), at 106%. 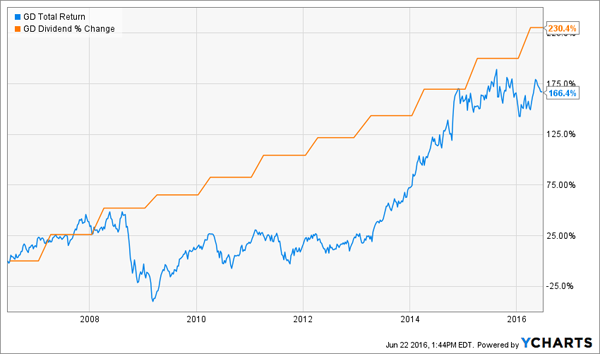 And with the shares trading at just 14.7 times forecast 2016 earnings, below other defense names like Rockwell Collins (COL), at 17, and Lockheed Martin (LMT), at 21.3, now’s the perfect time to take a position.

BPY: The Perfect Mix of Growth and Income

The company owns malls, office towers, industrial properties and apartments the world over, with about 250 million square feet of leasable space.

Brookfield has interests in 37 buildings in London’s Canary Wharf financial district, and that prompted first-level investors to send the shares down sharply on Friday. But that’s a major overreaction, as these properties only make up a small part of Brookfield’s total portfolio, and they’re top-quality buildings that will still attract a lot of interest, despite the result of the vote.

Meantime, the quarterly payout of $0.28 yields 4.8% annualized, and management plans to boost the dividend by 5% to 8% annually. Even if Brookfield Property hikes at the midpoint of that range (6.5%), you’d be pocketing a tidy 8.5% yield in 10 years if you bought in today.

That’s a reasonable expectation, considering the company has only existed in its current form since 2014, when it was spun off from Brookfield Asset Management (BAM), and has already worked in two 6% hikes in the last two years.

That should accelerate thanks to the 8% to 11% increase in funds from operations (FFO) per year management is targeting, on the strength of higher rents and occupancy rates, as well as the 8.5 million square feet BPY has in development.

Higher FFO supports higher share prices. So does BPY’s bargain valuation: right now, the stock trades at just 87% of book value, a gap I expect to close quickly once investors catch on to the company’s strong prospects.

The two ETFs I showed you earlier are great ways to generate high income now, but they do expose you to extra risk because they’re passive investments. When it comes to navigating the tricky fixed-income markets, I’d rather have a seasoned manager at the helm who can spot trouble and steer clear.

That’s why I recommend another type of investment—closed-end funds—over ETFs for the income side of your retirement portfolio. Right now, my three favorites throw off higher yields than PFF or JNK: I’m talking payouts of 8.0%, 8.4% and even 11%.

And unlike those two ETFs, my three picks trade at 7% to 15% discounts to net asset value, so if you get in now, you can look forward to a nice gain as that gap narrows.

Don’t miss out. Go right here to get the names of these 3 incredible income plays now.