The Summer Rate Hike’s Off: Here’s What to Buy Now

It’s a done deal: an interest rate hike this month or next—a prospect that was already slim—is officially off the table.

The final straw? A dismal labor report showing just 38,000 jobs created in May, the fewest in six years. But that’s not the only thing that killed the June hike. Tack on inflation well below the Fed’s 2% target and an economy growing at a modest 2% clip, and there’s simply no reason to raise rates now.

Futures markets agree, with traders calling for just a 4% chance of a June hike and only 1-in-4 odds in July. You have to go way out to December before a significant likelihood materializes (43% for a quarter-point, 19% for a half-point). 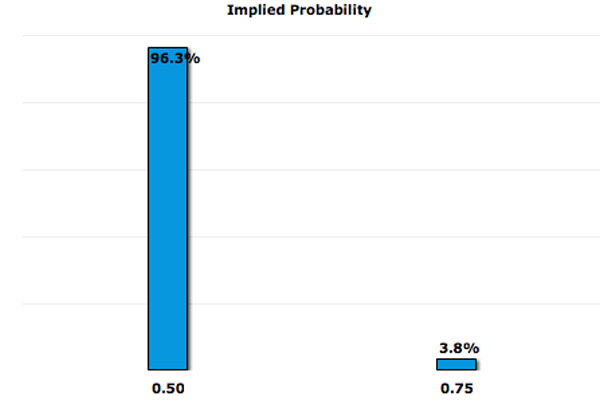 Sure, a lot can happen six months, but even if the Fed starts hiking sooner, it will be a long time before Treasuries and other so-called “safe” investments rival top-quality dividend payers yielding 4% and up. And besides, all the fretting you’ve probably heard about rising rates demolishing dividend stocks is just plain wrong.

In that span, the iShares Select Dividend ETF (DVY), which holds large cap dividend payers, posted a total return of 15.5%. The benchmark SPDR S&P 500 ETF (SPY) topped that, but not by much, returning 16.6% in that period.

And some sectors of the dividend universe skyrocketed, like real estate investment trusts (REITs). As tracked by the Vanguard REIT Index ETF (VNQ), they delivered a sparkling 38% return.

The bottom line: now’s a great time to buy top-notch dividend growers trading at attractive prices. Here are three to put at the top of your list.

This REIT Wins Either Way

But the REIT also prospers when rates are low, because low borrowing costs send more consumers to the mall, driving up demand for retail space. In the first quarter, DDR boosted its occupancy rate to 96.1% and renewed leases at an average of $15.88 per square foot, up from $14.27 in 2015.

Shareholders have pocketed a massive 375% dividend boost in the last five years. And right now, DDR is paying out 62% of funds from operations (FFO)—a better measure of REIT performance than earnings—as dividends. That’s a low level for a REIT, so there’s still plenty of room for more growth. 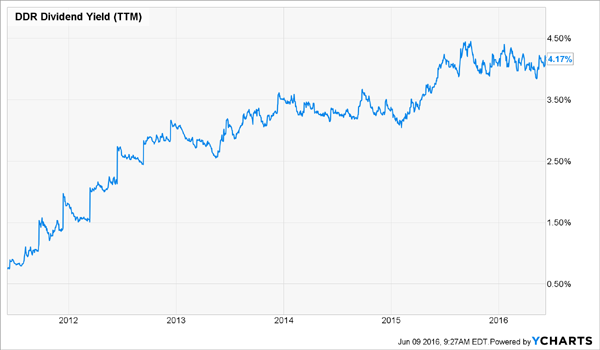 This 4.0% Payout’s Worth a Run for the Border

Even if the Fed doesn’t boost the interest income Bank of Montreal (BMO) earns on its loans in the next few months, the bank won’t much care. It’s initiating so many loans these days—especially in the U.S.—it will make up for it on volume.

Before we get into that, let’s face down a fear many investors have about Canadian banks: that the country’s pummeled oil companies will stop repaying their loans.

It’s true that BMO did raise loan-loss provisions for the energy sector to C$201 million in its fiscal second quarter, ended April 30, from C$161 million in Q1, but that was well below the C$248 million analysts expected. And even so, energy-sector loans account for just 2% of the bank’s total loan book.

In any event, BMO is focusing more on the U.S, where loan demand jumped 16%, boosting earnings south of the border by 27%. Canadian loan volumes rose 5%.

For now, you can pick up this 4.0% yielder for just 13 times trailing-twelve-month earnings—an incredible bargain for a company that often raises its dividend twice a year, boasts a moderate 51% payout ratio and holds Canada’s longest dividend streak: 187 years and counting.

A Cheap Way to Play the Online Advertising Boom

Verizon Communications (VZ) has jumped more than 15% since I first recommended it on January 9.

But don’t worry, it’s not too late to grab this dividend stalwart on the cheap: VZ trades at just 13.0 times its forecast 2016 earnings, well below its five-year average of 15.2, and yields a healthy 4.4%.

To be sure, the recent strike by workers at Verizon’s cable and landline operations will dent its second-quarter profits, but that’s already baked into the share price.

The bigger story is the company’s bid for Yahoo Inc. (YHOO). Should it go through, it would fit nicely with AOL, which Verizon bought last year, and help the telco scale up to grab a bigger slice of the booming online advertising market. According to PwC, online ad spending will grow at a 12% annual rate between 2015 and 2020 and will top TV ad spending next year.

And even if Verizon is outbid, it still has plenty to build on with AOL, owner of the widely followed Huffington Post, Engadget and TechCrunch websites, as well as its own online advertising platform.

On the dividend front, although telcos are known more for steady—rather than spectacular—payout growth, Verizon’s has risen the fastest of the bunch. Here’s how its hikes have compared to those of AT&T (T) in the past five years: 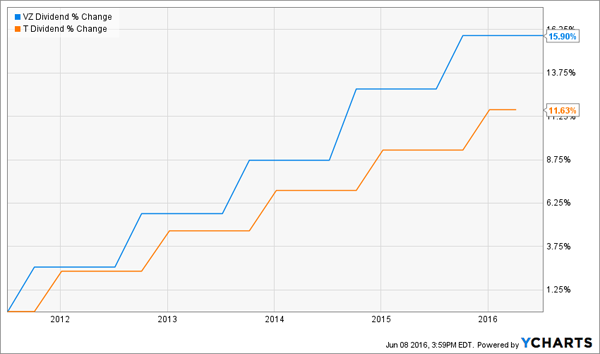 That payout is as reliable as they come, thanks in part to a hidden advantage: the most loyal customers in the business. Just 0.96% of Verizon’s wireless users canceled their service in the first quarter—ahead of AT&T, at 1.1%, T-Mobile US (TMUS), at 1.5% and Sprint (S), at 1.7%.

BMO, Verizon and DDR all offer tempting yields at great prices, but what if I told you that you could double their yields—and more—with three other undervalued investments I’m urging my readers to buy now? I’m talking about payouts of 8.0%, 8.4% and even 11%.

They’re perfect for today’s investment climate, where meager yields on fixed-income investments actually leave you with a loss. And forget about most blue chip stocks: an aging workforce and an (eventual) rise in interest rates will knock their returns down to the low single digits in the years ahead.

If you want to fund a comfortable retirement, you need to do better.

That’s where my three top picks come in. They’re an often-ignored asset class called closed-end funds, and in addition to the fat 8.0% to 11.0% yields they throw off, they all trade at big discounts to the value of their assets—with markdowns of 7% to 15%—so you’ll catch a nice ride up in the share price as that gap shrinks.

Don’t wait. Click here to get the names of all three of these “slam-dunk” income plays and start your new monthly income stream now.