I told you that the Infracap MLP ETF (AMZA) was a dog. Well, the fund just cut its dividend by 37%.

This is one of the biggest ETF payout cuts in recent memory, and it’s a gut punch to shareholders who rode out massive underperformance for the income tradeoff. That payout mattered. Just look at the difference between price returns and total returns in the chart below: 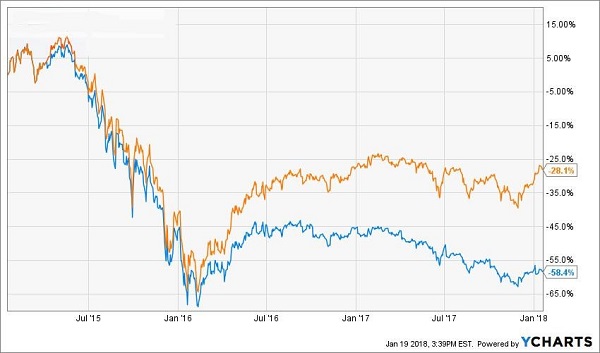 Just because a yield is wrapped in a fancy ETF wrapping doesn’t mean it’s safe.

This ETF dividend slash could be the first of several. So let’s talk about three ETFs – which pay between about 9% and 24% – whose dividends are far from secure.

Business development companies (BDCs) are one of the sweetest-paying areas of the market, typically delivering high dividends as a result of their structure. Specifically, BDCs are like real estate investment trusts (REITs) in that they’re required to pay out 90% or more of their taxable income as dividends in exchange for massive corporate tax breaks.

The good news: Those yields have expanded into very high single digits over the past four years or so. The bad news: That’s because of price declines, not dividend growth.

Many players in the BDC space have merely treaded water with their payouts for quite some time. But the past couple of years have been particularly painful. Here’s a quick look at what the UBS ETRACS Linked to the Wells Fargo Business Development Company Index ETN’s (BDCS) five largest holdings have done since 2016:

The overall effect hasn’t been terribly dramatic. BDCS’ nominal distribution is off just 4% from 2013 levels. But considering the fund has lost 19% on a price basis since the start of 2013, and its 20% total return over that time is woefully underperforming the S&P 500, BDCS investors need every basis point of income they can get. 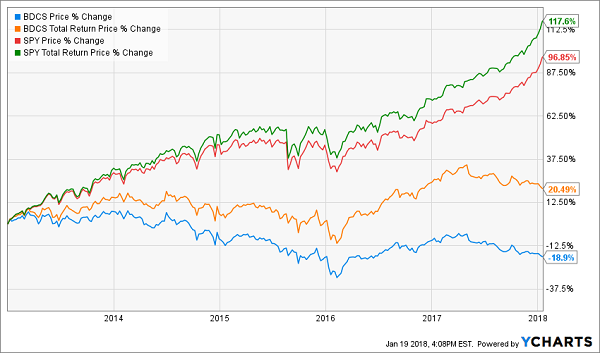 Or they can invest in the handful of promising names in the BDC industry.

All that said, the BDC space looks downright stable and sturdy compared to the dividend volatility we’ve seen in the mortgage REIT space. Here’s a quick look at the five-year distribution history of the iShares Mortgage Real Estate Capped ETF (REM): 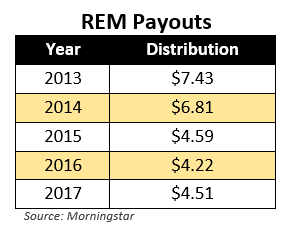 That’s not to predict that REM’s distribution will be another 40% lower come 2021. But mREITs’ performance and payouts should remain under pressure in a rising-rate environment, as the income from mortgages they hold is increasingly less than what they need to borrow to purchase more.

Will one or two mREIT champions stand out from the rest? It’s possible. But consider that 30% of REM is concentrated in two stocks: Annaly Capital (NLY), which hasn’t seen a dividend increase since 2014, and AGNC Investment (AGNC), which has cut its payouts several times in the past five years. Any positive performances lower down the portfolio have been simply drowned out, and that will continue to be the case going forward.

The pain may not be over for these shareholders.

Back to the pièce de résistance that sparked this whole discussion: the InfraCap MLP ETF (AMZA), an MLP fund that recently announced it will hack its payout by a whopping 37%:

From the press release:

The InfraCap MLP ETF (NYSE:AMZA) has announced that it is adopting a monthly dividend policy, replacing its traditional quarterly schedule, which had been in place since the fund’s 2014 inception.

The next dividend is scheduled to be declared on February 20th and paid on February 28th. Dividends are planned, but not guaranteed, for each subsequent month. The anticipated monthly dividend rate is $0.11 per share ($1.32 per share on an annualized basis). This action is being taken in order to align AMZA’s distributions to shareholders more closely with its distributable cash flow.

AMZA came to life at an unfortunate time, however, as the energy-price crash of 2014 hammered MLP prices. And InfraCap’s product really took it on the chin, grossly underperforming the Alerian MLP ETF (AMLP). 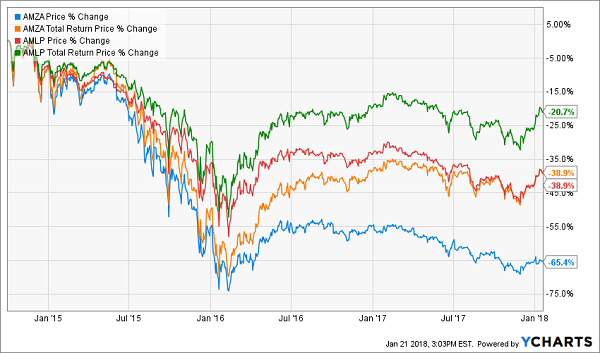 The underperformance was bad enough, but now, patient investors are having the fund’s one saving grace – its massive distribution – cut significantly because AMZA simply can’t make the math work. That distribution makes quite the difference, too – literally 26.5 percentage points of difference in just a few years.

And that 24% yield? It’s something of a mirage, though even based on the new lower payout, AMZA still offers a mouth-watering 16%. But anyone looking at this more “realistic” yield now must consider it with a shovelful of salt.

As you can see, many stocks and even funds that pay out high-single-digit yields are train wrecks or, at best, significantly flawed. They have big stated yields for the wrong reason – namely, because their prices have been axed in half or worse over the past year!

I’ll give you another example: Macy’s (M) pays nearly 6% on paper. But its business model is toast. You’ll get a couple more quarters of payouts, but how long before management realizes it needs to save every penny of cash to execute a turnaround?