These 3 Dividend Stocks are Dead Meat on the Next Pullback

The stock market is overdue for a correction (to say the least). And when the rising tide pulls back, certain dividend dogs will be exposed.

It’s all well and good to chase 5% and 6% dividends as “bond proxies” when the market continually grinds higher. It’s another story when stocks begin to wobble – and an entire year’s worth of yield is jeopardized in a down week!

Of course some dividend stocks will hold up just fine. But we’re going to pick on three that are likely to be exposed when the bullish music stops.

Back in July, I highlighted Gladstone Investment Corporation (GAIN) as a business development company stud amidst a pair of BDC duds.

And at the time, I highlighted a few things to like, such as a generous monthly dividend and a 5% discount to net asset value.

So, what has GAIN been up to in the meantime?

Well, it produced a decent enough fiscal Q2 report at the end of September, improving its net interest income by a penny per share to 18 cents – total investment income actually declined sequentially, but the company cut back on expenses by about 10%. The company also upgraded its monthly payout from 6.4 cents per share to 6.5 cents.

But the stock has really taken off since September, jumping 22% against a 4% decline for the VanEck Vectors BDC Income ETF (BIZD). There’s nothing wrong with that – but the result is a suddenly overbought status in which GAIN is trading at an 11% premium to NAV. This still is a quality name, then, but a market pullback could knock off some of Gladstone Investment’s recently acquired froth.

Gladstone Investment (GAIN) Is Sitting in the Nosebleeds 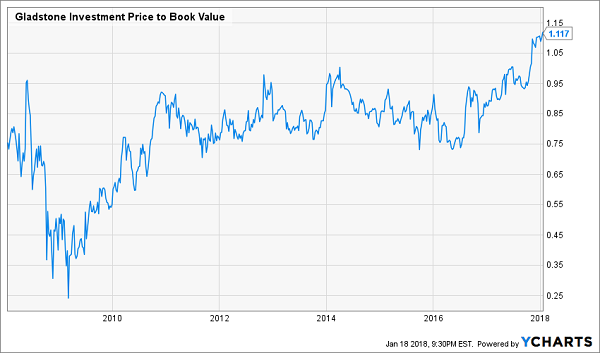 When it comes to dangerous dividends, Guess? (GES) and Abercrombie & Fitch (ANF) are popular whipping boys. But Buckle is up 26% in the past three months – even including a recent pullback – and could be set up for more losses should the market pull back.

While retail has been hammered over the past few years amid the increasing encroachment of digital vampire squid Amazon (AMZN), the industry received something of a respite over the past few months amid tax-law optimism and a stellar holiday shopping season.

Buckle, however, didn’t look so hot.

The retailer announced a 4% year-over-year decline in revenues for November, on a 3.6% decline in same-store sales. It followed that up with a 4.8% dip in net sales for December, on a 4.1% stumble in comps. And when the company reports fourth-quarter earnings here in about a month, analysts expect merely flat sales and a 3% decline in profits. That doesn’t sound like a fruitful holiday to me.

BKE shares aren’t expensive, per se, at 12 times forward estimates, but why should they be? The company should finish off 2017 with a 16% drop in earnings, followed by another 4% dip next year. Expect Buckle to keep shedding its gains from the past few months, especially if its Q4 report comes out ugly compared to the rest of the fashion retail field.

For a long time, Gannett (GCI) was a somewhat sneaky media play. That’s because while most people knew it for its USA Today and other print brands, the company also sported digital and attractive broadcast businesses.

No more. The company in 2015 spun off the publishing business, which retained the Gannett name, and the growth divisions remained in the newly dubbed Tegna (TGNA). That merely exacerbated what already was a steadily diminishing income situation – from $277 million in 2012 to $211 million in 2014 to $53 million last year.

The company did make a stab at further consolidating the publishing business, offering in 2016 to buy Tronc (TRNC) – the former Tribune Publishing, which owns the Chicago Tribune and Los Angeles Times – but dropped the bid after an unsuccessful six-month courtship.

Shares have run up 25% in the past few months to boot, bringing the company’s forward price-to-earnings ratio to about 14. That’s hardly Rubenesque, but it doesn’t look great when you consider that’s based on analysts’ predictions for an 8% profit decline next year. 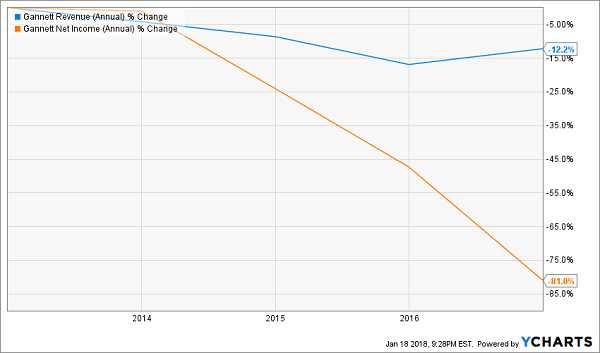 Besides, the optimism likely has to do with the same thing driving many other domestic stocks – a reduced corporate rate, which benefits Gannett in an outsize way given its American-centric business and high 30%-32% effective rate. It helps the bottom line, but it doesn’t solve publishing’s terminal decline.

Meanwhile, that dividend isn’t exactly pristine. At 16 cents quarterly, it represents 98% of the company’s profits in the first three quarters of 2017. Yes, the dividend looks more sustainable on the cash-flow front, but that’s another figure that keeps diminishing over time.

You can do better than an above-average but not spectacular dividend in a dying industry.