Your Playbook For The New “Dividend Bubble”

There’s an alleged bubble in “low vol” stocks that is quickly extending to dividend-payers. Here’s how to play it.

Since the start of the year, the iShares Edge MSCI Minimum Volatility USA ETF (USMV) has taken in more than $5 billion, placing it first among inflows for stock-focused ETFs. The fund holds stocks that don’t move much, such as General Mills (GIS), AT&T (T) and Johnson & Johnson (JNJ).

Low vol was the rage for the first-half of 2016. Investors, wary of a stock market crash, sought refuge in these staples. USMV pays a modest 2.2%, but until last month there was hope that rising rates would breathe life into fixed income for those who needed actual yield.

That changed for a while with the Brexit vote, which delayed the next rate hike by a year or two (at least). Instantly, yield became even hotter than low vol: 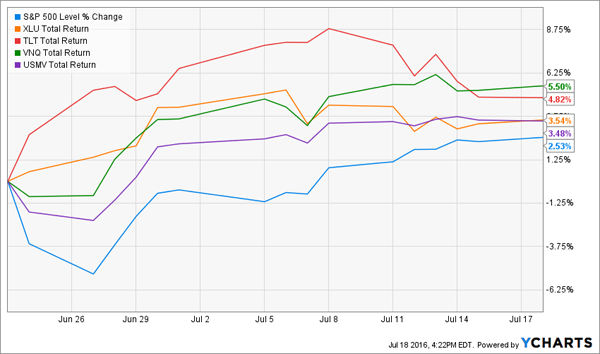 Are these moves overdone, or is the party in yield just getting started? It depends. Some issues are already in bubble-mode, with limited upside (and payouts) from here. Meanwhile other stocks and funds do still pay meaningful dividends and are likely to benefit as the global manhunt for yield expands into all corners of the investment world.

Let’s start with the danger areas you should avoid, or sell immediately.

Yields on long-dated bonds are priced for deflation as they hover near all-time lows. The 10-Year Treasury Note pays just 1.6% today while the “Bond God” himself Jeffrey Gundlach warns that this could be a bottom. Either way, he explained to Barron’s that upside is limited:

I’m not at all convinced that we are going to see much lower yields in the U.S. But even if we do, you’re talking about a de minimis profit. Even if the 10-year yield drops another percentage point, how much will you make? Less than 10%. There are better ways to speculate.

Year-to-date XLU has returned 22.3%. While not quite a parabolic move, the problem with a big bull move in utilities is that it reduces yield – the reason most investors buy them in the first place. XLU hasn’t paid this little in more than seven years:

Bull Market in Utilities is Bearish for Yield 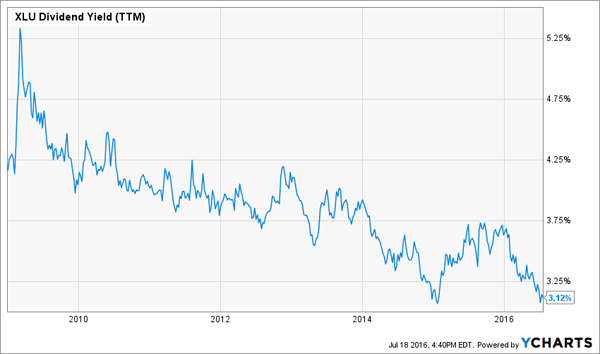 Last week, Duke Energy (DUK) increased its quarterly dividend by 3.6%. Shares now boast a 4% forward yield. Add the two together, and the stock should deliver 7-8% annual returns to investors. That’s not bad, and it’s likely to beat the broader market in the years ahead. But that’s not saying much, and there are better places to look for yield and growth – such as REITs.

Real estate investment trusts (REITs) have been on a run too, with VNQ up 13.3% year-to-date. The index pays 3.3%, but there is a much wider variance with REIT dividends than utility payouts (as it is possible to find reliable REITs that pay 6%, 7% or even 8% annually).

My advice, in fact, is to focus on REITs that have market capitalizations less than $10 billion. While not exactly microcap territory, REIT stocks below this threshold tend to be less followed by analysts (such as these three oversold issues paying 6% or better). In fact, all three names I highlighted last week have outperformed the broader REIT and stock landscape since the Brexit vote: 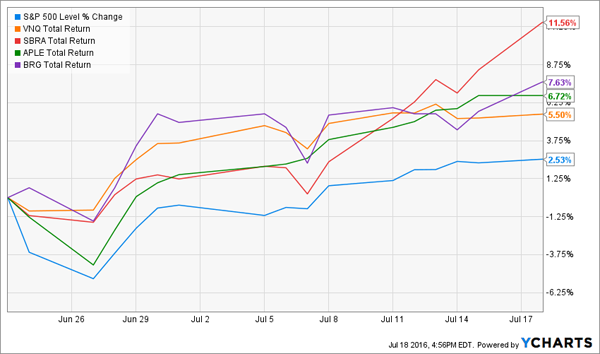 These underappreciated REITs should continue to outperform. Many boast safe payouts backed by secure cash flows from high quality property portfolios. Plus, with $100 billion or so looking for a home in the REIT sector by September, these rocks will gradually be uncovered – and bid up.

While the Bond God is down on bonds at large, he loves closed-end funds. Reason being, their risk-reward setup is exactly the opposite as the one he panned for Treasuries.

Worst case, he said, these investments will trade flat and investors will collect 8-11% annual dividends. Best case, they’ll return 20% – and the fat dividends will still be paid out.

Reason being, many closed-ends actually trade at a significant discount to their net asset value (NAV). My favorite currently trades at a 15% discount – which means when you buy the fund, you’re getting it for just 85 cents on the dollar.

As investors grow tired of grinding out 3-4% yields from slow-growing utilities, they’re going to bid these discounts away. In fact, it’s already started, with many CEFs starting to rally post-Brexit.

Which means the best time to buy is right now, as closed-ends go from underappreciated to loved investments. I like three funds in particular. All three pay yields of 8% or better, and trade for discounts from 7% to 15%! Click here and I’ll share the names, tickers and buy prices for these “slam dunk” income plays.