I really hope you didn’t follow the flawed “sell in May and go away” strategy I warned you about last month. Because if you dumped all your stocks on, say, May 1, you’ve already missed out on a 1.5% rise in the S&P 500.

That may not sound like a lot, but that period saw some nice gains from recommendations I gave you earlier this spring, like Apple (AAPL), one of my top picks for a retirement portfolio, which jumped 6.5%; Allied World Assurance (AWH), up 4.2%; and senior care provider Ventas, Inc. (VTR), up 6.8%.

I still like all three companies, particularly Allied World, which still trades at just 94% of book value.

The problem? With S&P 500 trading at an overstretched 24 times trailing-twelve-month earnings, deals like these are getting tougher to come by, at least here in the U.S. But luckily for us, there are still plenty of attractively priced dividend growers beyond our borders.

What’s more, international companies boast dividend yields that crush those of their American cousins. According to Nuveen Investments, the MSCI EAFE Index, which includes large- and mid-cap stocks from 21 developed nations outside North America, has delivered yields 50% higher, on average, than the S&P 500 over the past decade.

Our northern neighbor is a great place to begin our three-stock world tour because you don’t even have to leave the U.S. to invest in Canadian stocks: many of the best ones trade right here on the NYSE.

Case in point, TD Bank (TD), a 3.9% payer with a lovely habit of dropping two dividend hikes a year on investors, which it did from 2011 to 2015. TD only boosted its payout once last year, but that was a meaty 8.5% increase (in Canadian dollars).

The bank upped its dividend by 7.8% in April, and I’m expecting more this year, thanks to its low 45% payout ratio, or the percentage of earnings paid out as dividends, and last quarter’s 5% year-over-year earnings bump.

TD also stands out for its big U.S. banking business, which accounts for about a third of total net income. In the latest quarter, this division’s adjusted profits jumped 13% as Americans took out more loans. That was a key driver behind TD’s overall bottom-line growth.

The stock trades at just 13.0 times its last 12 months of earnings, a steal in light of TD’s double-digit upside and 3.9% yield, which eclipses those of big U.S. banks like Wells Fargo (WFC) and JPMorgan Chase & Co. (JPM).

Raise a Glass to This Dividend

Across the pond, U.K.-based Diageo (DEO), which trades in the U.S. as an American depositary receipt (ADR), boasts a 3.1% yield and has been serving up dividends since its creation in 1997. The giant spirits maker has never cut or frozen its payout, even during the financial crisis. And over the last 10 years, it has grown its annual dividend rate at a blistering 8.2% annualized pace (in British pounds).

Diageo operates in 180 countries and owns some of the biggest names in the booze business, like Guinness stout, Smirnoff vodka and Johnny Walker whiskey.

Still, it hasn’t been all smooth sailing. In the past couple of years, the company, which gets about half its revenue from outside North America and Europe, has seen sales slow as emerging markets like Brazil and Russia have struggled.

But if your timeline is long (and it should be), you have nothing to fear from blowups like these. Because one thing is certain: the developing world’s middle class will keep growing—and thirsting for Diageo’s market-leading brands—for years to come. In China alone, urban income will double by 2022.

Meantime, Diageo trades at 18.2 times its last 12 months of earnings, a 9% discount to its five-year average, so you can expect a nice rise in the share price as that discount narrows—and you can nurse that 3.1% payout while you wait.

Templeton Global Income Fund (GIM) is a closed-end fund that trades at a 9.9% discount to net asset value (NAV). That’s more than three times its five-year average, so, like Diageo, you can buy this one and look forward to nice gain—more than 6%, in this case—as that gap narrows.

The fund doesn’t hold stocks; instead, it invests in fixed-income securities, preferred shares and foreign-government bonds with an average coupon rate of 5.2%. GIM is heavily weighted toward emerging markets, with Asia and Latin America accounting for about 65% of its holdings.

You’re probably aware that Fed rate hikes could cause investors to flee emerging markets for higher yields here in the U.S. But that risk is already priced into this fund—hence the wide discount to NAV—so I expect it to trade flat, at worst, in the next few months. Even if that’s how things play out, you’ll be well compensated for your time, thanks to the fund’s 4.7% yield and dividends paid monthly. 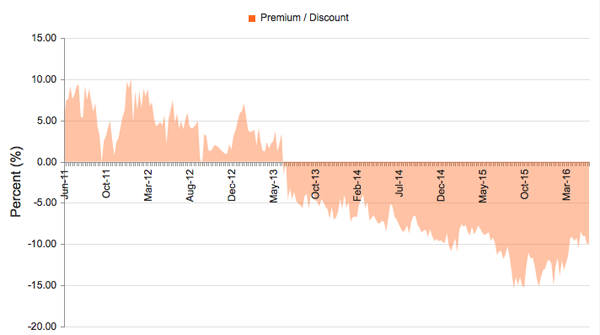 The fund is also more stable than the market as a whole, sporting a beta rating of 0.71, meaning it’s 29% less volatile than the S&P 500.

My favorite overseas investment right now is another closed end fund that’s locked into a bullish trend that will continue for decades, at least: the urgent need to replace the world’s ramshackle roads, bridges and power plants.

According to the American Society of Civil Engineers, the U.S. alone will need to pour $3.6 billion into infrastructure by 2020—and that must happen, no matter who wins the November election.

This rock-solid CEF is the best way to play this exploding megatrend—and it throws off a gaudy 8.2% yield, to boot.

Here’s the best part: as I write this, it’s trading at a 14% discount to net asset value. And that hefty markdown will close in the months ahead, giving us “instant upside” on top of our 8.2% yield!

How can it throw off such a high yield? It’s holds preferred shares in some of the world’s top utilities, telecoms and other companies that run crucial infrastructure—and these preferreds pay much higher yields than the common shares you typically see quoted.

Normally, retail investors like you and I can’t get our hands on them—but now we can buy a basket of them with just one click.

Don’t miss out. Get the name and ticker of this incredible fund right now—plus the names of two other closed-end-fund buys yielding 8.7% and 11%.