The S&P 500 may yield just 2.2% today – but if you smartly invest in stocks that specialize in profitable niches, you can collect 6-11% yields right now. With double-digit price upside to boot!

Real Estate Investment Trusts (REITs) are some of my favorite vehicles for specialization and yield. REITs must have 75% of their assets in actual real estate and earn 75% of their income from those assets. These dividend machines are legally required to pass along at least 90% of their earnings to shareholders.

This is actually the best time to buy REITs this decade. The Vanguard REIT Index ETF (VNQ) pays 3.9% today – just about its highest since 2009. You’ll bank easy double-digit gains buying high quality REITs when their yields are high.

Of course, we must make sure the dividends are well funded, and preferably growing. Which is why I love REITs that specialize. The more unique the focus, the better. It means less competition, and higher rents.

Last week I shared my favorite office REITs – good plays on a quietly booming job market. Today I’ve got 4 unique niche REITs to share with you. They all have natural competitive moats and rising rents powering their big yields.

Four Specialized REITs With Yields Up To 11%

HIFR is a unique REIT that behaves somewhat like a utility company. Their income comes from the energy distributed through regulated power lines. This means that InfraREIT’s income is stable, regardless of whether or not energy prices rise or fall.

But “first-level investors” mistakenly believe they must sell this stock along with oil. Hence the current value in the share price.

The company went public last year, and amidst the energy market slump has seen its stock price plunge almost 43% since it IPO’d. Many new companies are often abandoned and forgotten about in the subsequent quarters after the IPO. InfraREIT has five analysts covering the firm, but none of them have ever issued an update. They’ve all moved on to greener pastures!

That’s too bad for them, because InfraREIT now pays a $1 dividend that yields 6.5%. The company even turned profitable in the fourth quarter of last year, in the face of declining energy prices. 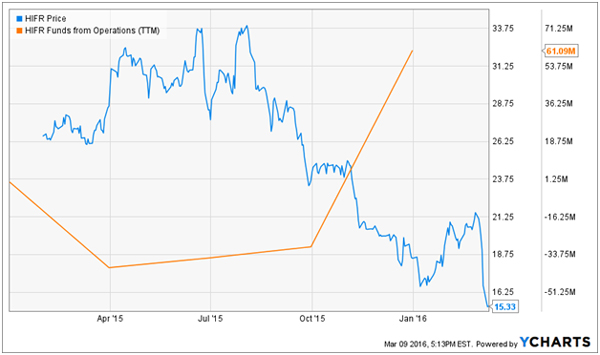 Management projects an 8-10% dividend growth rate annually through 2018. Which means investors who purchase today will soon be earning 8-9% on their initial invested capital.

Corrections Corp Of America (CXW) manages prisons and correctional facilities for a variety of federal, state and local jurisdictions. The company operates solely within the U.S. and also provides transportation services to government agencies.

Why are for-profit prisons and correctional REITs doing so well? Easy – their captive audience… 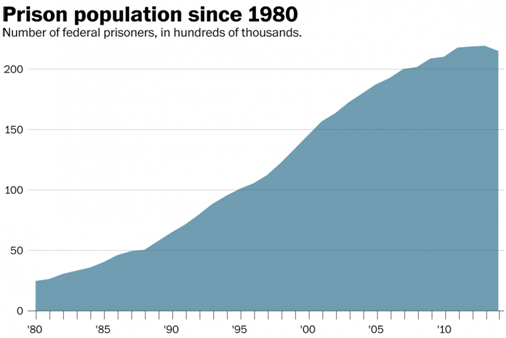 And this is just the federal side. States and local jurisdictions have been increasing their numbers of imprisoned citizens as well. The U.S. incarcerates 21.4% of the global prisoner population (of just 4.5% of the world’s population).

For starters, American has had the political will and capital to build prisons. And tough laws passed in the 1990s on crime placed mandatory sentencing on a raft of minor crimes, including marijuana possession.

Some of these laws will take time to roll back. Others may never be rolled back. In the meantime, we’re going to see near-record prison populations across many municipalities. Even if incarceration rates do fall drastically, many of these prisons have bed minimums that must be paid regardless.

CXW shareholders will continue to collect their rent checks for some time.

The GEO Group Inc (GEO) specializes in correctional detention and re-entry facilities, electronic monitoring and community-based youth services. The company also provides construction and design services for new facilities. Internationally some of their services include immigration custody services. This private prison REIT operates facilities in the U.S., the United Kingdom, Australia and Africa.

The company has ownership interests in or manages 104 facilities worldwide with 87,000 beds. And while the U.S. leads in “per capita” incarceration, there’s growth internationally, too.

Thanks to these trends, GEO has seen its revenue climb for the past ten years. The GEO Group pays a $2.60 dividend that currently yields 9%. The company has raised its dividend five times since 2012 (an increase of 225%). 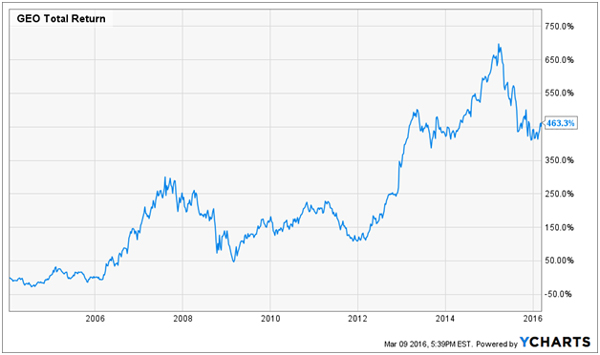 The current pullback is a buying opportunity. Like our other correctional REITs, interest rate fears, the political environment and populist sentiment towards the business has weighed on the stock price.

For-profit prisons aren’t the only way to collect rent checks from the government. For a direct paycheck from Uncle Sam, consider this next “Federally sponsored” stock.

Government Properties Income Trust (GOV) leases a variety of properties to state and federal governments, the United Nations and other non-government tenants. The company leases its 71 buildings primarily to the Feds, which rent 67% of their properties. It also leases 24 buildings to 12 state governments, which represent another 20% of its business.

Often you’ll hear Government Properties Trust being referred to as Uncle Sam’s landlord. It’s an apt moniker and makes for incredible investment security. A total of 93% of GOV’s income comes from government tenants.

Many of these buildings are rented on long-term leases to the government often 10 to 20 years. Their payments appropriated years in advance and their income secure. It’s the reason that GOV has a 94.5% occupancy rate.

GOV currently pays a dividend of $1.72 that yields 11.1%. They’ve raised it four times over the past five years. Who would ever sell a stock like this? The first-level types worried about rising interest rates – they sent GOV 30% lower in the last year.

But Big Hikes Are Off The Table

The “smart money” is pricing in a mere 0.25% rate hike between now and the December Fed meeting. That’s nothing more than noise.

Also, as I mentioned recently, REITs historically have performed great as rates have risen. The 2004-06 rate hike cycle took rates from 1% to 5.25% – an earthquake. But it didn’t shake VNQ and other niche REITs, which simply rolled.

As much as I like prisons, Federal housing, and power transmission, my favorite REITs today operate in the healthcare sector. It’s an unstoppable growth opportunity – America is getting older, and we need more care as we get older. Which means demand will continue to rise for facilities like skilled nursing facilities, rehab centers and hospitals – no matter happens in the economy, Fed meetings, or China.

I love 3 healthcare firms in particular, paying yields up to 8%. And all three are increasing earnings and their dividends annually. Anyone who buys today will see a 10%+ yield on their initial capital in no time at all.