Bonds are finally an intriguing place for retirement income.

Safe Treasuries still pay a respectable (by their standards, at least) 3.7%. But we contrarians can do better.

Those are not typos. These are fat freaking yields.

Yes, These Bond Yields Are Real. And They Are Spectacular.

And even better still, you can buy these bonds for as low as 90 cents on the dollar! How is that? Well, the cheapest fund trades for just 90% of its net asset value (NAV).

It’s NAV is the street price of the safe bonds it owns. If the fund liquidated today, it would fetch 100% of NAV. But it’s a bear market, so bargains abound. And we can buy it for just 90% of NAV—or 90 cents on the dollar.

Why? Let’s thank our intrepid Fed.

Bonds have taken an absolute beating in 2022 amid a year’s worth of aggressive Federal Reserve interest-rate hikes—part of Chair Jerome Powell’s action plan to extinguish raging inflation.

For example, the iShares 7-10 Year Treasury Bond ETF (IEF), a proxy for medium-duration bonds, currently sits near decade-plus lows amid a 15% drop year-to-date. That might not sound like much compared to the beating stocks are taking, but that’s as precipitous a decline as you could reasonably fear in mid-length bonds.

I stress “near” because bonds have been rallying of late. A temporary snap-back? Maybe. But it comes amid budding, albeit uneven, optimism over the past month or so that maybe, just maybe, the Fed’s rate hiking is about to slow.

Just a week ago, the Fed released minutes from its most recent FOMC meeting showing that a “substantial majority” of the central bank’s officials believe it would “likely soon be appropriate” to slow its rate hikes.

And on Wednesday, Powell added more credence to the idea, saying smaller rate increases “may come as soon as the December meeting.”

Bonds aren’t a monolith, either. Short-term and long-term rates can indeed move in different directions, and that matters when determining your bond-buying strategy. Recall what I said a few weeks ago:

“The ‘short end’ (maturities closer to today) of the yield curve is grinding higher because the Fed head has said he has more work to do. Over time, the 2-year Treasury tends to lead the Fed Funds Rate because it anticipates the Fed’s next move. … The ‘long end’ (maturities farther away) of the yield curve, meanwhile, is catching its breath while it weighs the lesser of two evils: inflation today or a recession tomorrow.”

In other words, the window might be closing on our chance to buy low.

Fortunately, we can make the most of that opportunity by buying not bond mutual funds or bond exchange-traded funds (ETFs), but bond closed-end funds (CEFs). That’s because, in addition to buying while short-term bonds are against the ropes, many of these CEFs are also trading for below their net asset value, meaning we’re buying the bonds for even cheaper than we could by purchasing them individually.

While the fate of these funds is ultimately up to the Fed, here are three intriguing opportunities right now: 3 CEFs yielding 8.6%-9.6% that are trading at high-single-digit and low-double-digit discounts to NAV:

As crazy as it might sound, you can wrest a nearly 9% yield—paid monthly, no less—from a bond portfolio with an average maturity of less than three years!

The PGIM Short Duration High Yield Opportunities Fund (SDHY) is a relatively new fund with inception in November 2020, so most of its short life has been spent weebling and wobbling. SDHY invests primarily in below-investment-grade fixed income, and it will typically maintain a weighted average portfolio duration of three years or less and a weighted average maturity of five years or less—the latter is considerably shorter than its target right now, at 2.9 years.

The short maturity helps tamp down on volatility, but SDHY is hardly your average short-term bond fund, including quite a bit more movement.

Tough Sledding Since Inception, But … 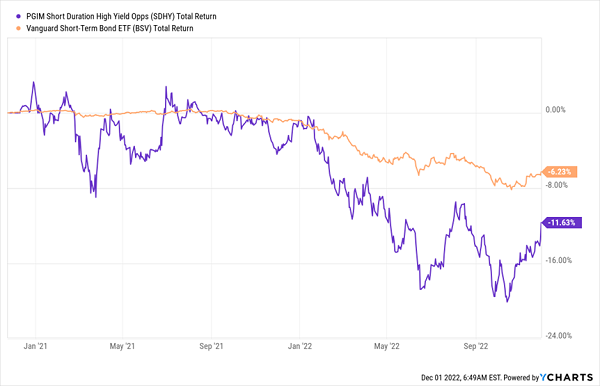 SDHY packs a mean yield punch in part because of its low credit quality. Just 11% of its portfolio is investment-grade; another 34% is in BB debt (the top tier of junk), and another 35% is in B-graded bonds.

Also helping is a decent amount of debt leverage—17% at last check, which isn’t exceptionally high, but still a fair amount of extra juice to performance and yield.

That juice works both ways, hampering SDHY’s performance during a bear climate for bonds. But clearly, given its performance of late, it has significant potential once the Fed starts slowing its hike pace (and especially once it actually throttles back rates).

Also alluring is a nearly 10% discount to NAV, implying that you’re buying SDHY’s bonds for 90 cents on the dollar. Granted, that’s not much more than its historical discount since inception of 10.3%, but it’s still a bargain no matter which way you slice it.

The Western Asset High Income Opportunity (HIO) is a little farther along the maturity spectrum, at an average of 7.3 years, but it’s another compelling high-yield play that’s worth eyeballing in the current environment.

HIO is a classic junk-bond fund whose management team scouts out particularly attractive values. But focus on value doesn’t translate into more credit risk than its contemporaries—sure, its BB exposure of 34% is far less than its benchmark (50%), but that’s countered by some investment-grade debt (2% A, 13% B). (The rest of the portfolio is similar to its benchmark.)

Also, while this CEF is allowed to use leverage, it currently doesn’t. So the higher-than-junk-average yield you see (also paid monthly!) is simply a result of its management’s bond selections.

Despite not using leverage, this CEF’s performance is much more volatile than plain-jane ETFs—historically for the better, though the past year has been miserable for shareholders:

HIO Comes Out on Top, Given Enough Time 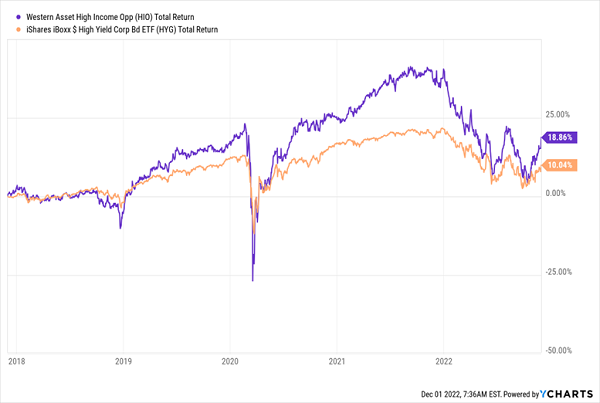 HIO’s 8.9% discount to NAV is attractive, at least in a vacuum—but it’s something of a wash considering that, on average over the past five years, the fund has traded at a 9.1% discount.

There’s hardly “a final word” with this Fed. Yes, Powell gave his strongest signal yet that rate hikes will slow down. But the Fed has already surprised some economists with its aggression on rate hikes and other quantitative tightening—and if high inflation persists, short-term bonds could remain in the doghouse longer than expected.

But longer-dated fixed income, especially with decent credit quality, could do OK.

The BlackRock Credit Allocation Income Trust (BTZ), which invests primarily in bonds but also other fixed income such as securitized products and bank loans, is an interesting choice here—one with an excellent track record, especially if you can stomach some deeper valleys along with those higher peaks. 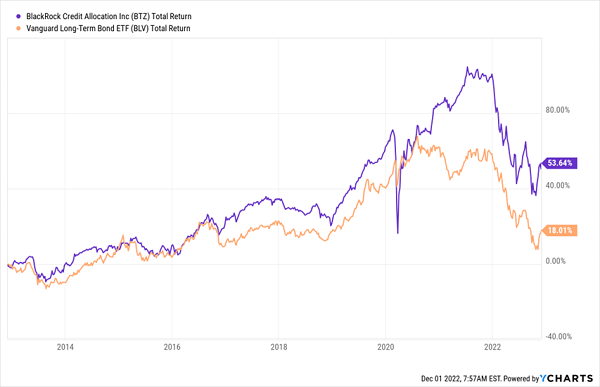 BTZ’s average portfolio maturity is a hair over 18 years—not quite at the 20-year threshold for “long,” but plenty long nonetheless. Credit quality is an optimal blend, however: 55% is investment-grade (most, 42%, in BBB-graded bonds), another 22% in top junk tier BB, and most of the rest in B- and C-rated bonds.

This fund is an ideal example of how CEFs benefit from active management and more tools to work with. Managers can hunt down value-priced bonds rather than just plugging in whatever an index tells them to, and they’re also able to scour the credit world for other appealing instruments at times when bonds aren’t the top play.

Also, BTZ is at the high end of the leverage-use spectrum, at more than 28% currently. That can weigh on performance given a high cost of debt, but it can also drastically improve performance in a bond upswing—and that’s how its monthly payout stretches to nearly 10%!

My only gripe right now? BTZ isn’t much of a bargain right now, with its roughly 5.7% discount to NAV coming in higher than its 5-year average of around 8%.

But it still beats buying these bonds individually.

Give Me 4 Minutes, I’ll 4X Your Retirement Income

If we want a cozy, comfortable retirement without bleeding your nest egg dry, we need to be able to plan around our income with laser precision—a tall, tall task when the Fed is constantly tinkering with its monetary policy.

But fortunately, we’re navigating the Fed just fine in our “Perfect Income” portfolio—and you can too.

Even better, many investors could double, triple, even quadruple the dividends they’re receiving from the average S&P 500 stocks.

Take control of your financial legacy today. Click here for my newly-updated briefing on the Perfect Income Portfolio!